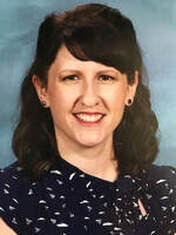 Mrs. Cat Slade began her musical journey on her 8th birthday when her parents gave her piano lessons as a gift.  As a 5th grader, she joined band as a percussionist, which was a year earlier than her peers.  In the 8th grade, she  began to study the bass clarinet and continued with great success in high school at state-wide solo and band competitions.